The wolf clan were founded by the headmaster of the Void Blade ronin warrior order after they had rescued the crown prince from a Yokai taking on the form of a great white stag. The Void blades made use of their esoteric combat techniques and dispatched the Yokai. They then hosted the crown prince in their mountain stronghold near a hidden lake. After the prince was successfully returned to the Imperial Legions the headmaster, Orida, was granted a minor clan with all members of the Void Blade school being made into members of it. They were to hunt down Yokai, especially those in the wilds who could prey on travelers, hunters, and the desperate.

Since their founding this has become their focus, they have also had to learn to rule over a small region of land, specifically their small mountain valley at the edge of Crane, Scorpion, and Lion lands. They tend to keep out of the affairs of the other clans and instead focus primarily on the hunting down of Yokai and protecting the common people from would be bandits. While this is not part of their official duties, they see it as a preventative measure against the angry dead causing troubles. The Wolf Clan has two major schools, the Orida Shrine Blade school which has existed since before the clan’s formation as the Void Blade school, and the Wolf Priest school who are dedicated to Taiku-no-Makami, the wolf kami who guided the Void Blades to the prince before the Yokai could kill him.

The current clan champion, Orida Kenji, is seeking to expand the prestige of the Wolf Clan by working with other Minor Clans against the elemental instability that seems to be plaguing Rokugan. Orida Kenji has also recently been bringing in new ronin into the clan, expanding the number of samurai serving the clan substantially. 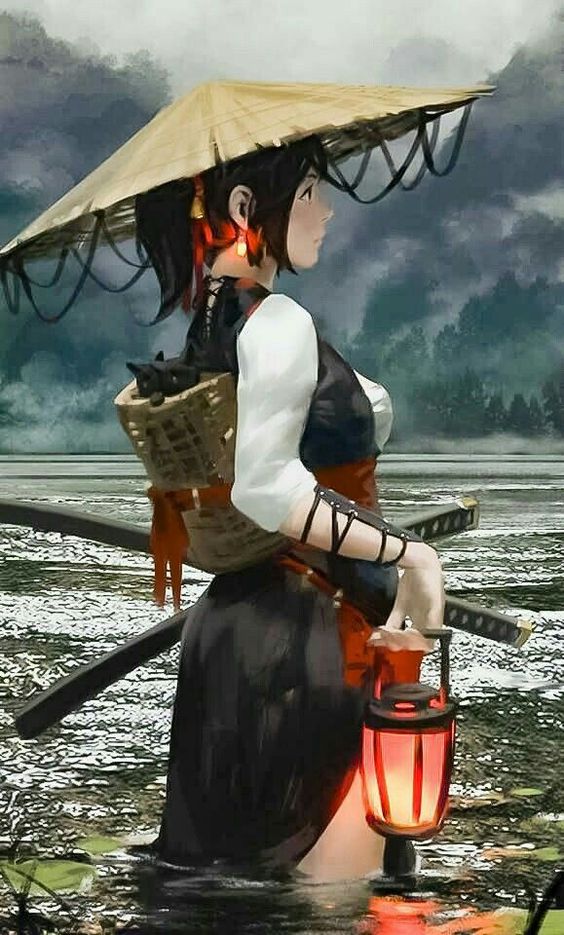 The Orida Family ,while forged from various ronin and former Great Clan Samurai who joined the Void Blade’s prior to their ascent to minor clan status, is now a truly unified family. They took on the name of the Headmaster of the Void Blade school at the ascent to minor clan status, both to honor her as a great leader, but also because she is the one who spotted Taiku-no-Makami that led to the safe return of the crown prince. One of the defining features of the Orida family are their red irises, some say that this is a blessing from Taiku-no-Makami for their dedication, and a sign of their favor.

Their dedication to the hunting of yokai, and perfecting their ability to commune with the kami of their blades has made them skilled both in crafting weapons in general and in surviving the harsh wilderness of Rokugan. When hunting Yokai the Orida Family typically travel in ‘packs’, small groups of samurai typically consisting of several Shrine Blades and at least one Wolf Priest. It is not uncommon though for members of the Orida family to work beside ronin and the various minor and great clans in conducting their duty.

What Does Your Character Know?

All Wolf Clan characters have a greater awareness of the fallowing topics:

What Does Bushido Mean To Your Clan?

Of all Bushido’s tenets Courage is the tenant that matters the most to the Samurai of the Wolf Clan. A member of the Wolf Clan is well aware that they must be willing to sacrifice everything they are to ensure the safety of the world from Yokai.

Honor is of all the other tenets, the one that means the least to the Wolf Clan. While it is not looked down on by any means, Honor will often lead to one not making the decisions necessary to survive when Yokai or dealing with dishonorable bandits and ronin. They must be flexible with their honor to ensure they can accomplish their duty.

The Void Blade School was a school for an esoteric warrior order founded by the Ronin, Suiko, who had once been Shiba Suiko. It is said that under the guidance of Taiku-no-Makami she learned how to beseech the kami to reside in her weapon, granting her their aid, and dedicated her life to defending the heimin from Gaki, Yokai, Oni, and erring Samurai. She denounced her lands, power, and clan becoming a ronin and founding a warrior order dedicated to the teachings of Taiku-no-Makami. The school once required those who sought to learn from it to give up their clan, lands, and all titles, to become ronin. After the order saved a crown prince from a Yokai, that had taken on the form of a large white stag, they were made into a minor clan. The school was reformed into the Orida Shrine Blade School, and all who join it must now also join the Wolf Clan. Students are taught esoteric meditation techniques, how to forge and create their own bladed weapons, and various combat techniques to be able to defend the heimin of Rokugan, and to fight the Yokai that threaten the celestial order. The members of the Shrine Blades only hold loyalty to the Emperor, the Wolf Clan, and the heimin of Rokugan.

Shrine Blades utilize bladed weapons, typically a katana, as their weapon to house the kami. It is not unheard of though for some Shrine Blades to utilize other bladed weapons like a naginata or a wakazashi. The actual weapon itself, typically called a shrine-sword, must be cared for and treated as though it were the go-shintai, central sacred item, of a shrine. The blade should be kept concealed except when used in combat, or offerings are being made before it. After a conflict, because of the kegare, ritual impurity, associated with blood, the shrine-sword must be ritually purified with spring water, or fresh river water and a clean cloth used only for ritual purposes. So long as the purification ritual takes place in the same day as the kegare was introduced to it, and it was not sheathed there is no chance of it becoming a kansen. Should a Shrine Blade mistreat their shrine-sword the kami inside may leave them, or it may become afflicted and eventually become a kansen.

Living Weapon (School Ability): So long as you have a kami inhabiting your weapon from the Awaken Weapon ritual you are able to utilize a portion of its power. When the kami inhabits the weapon you must select an elemental ring other than void, the kami of your weapon embodies this element. This allows you to always have access to that kami’s ring type opportunities even when using a different ring’s stance. When you’re in a stance that the kami is attuned to you may spend a void point to deal extra damage equal to that ring plus your school rank.

As a downtime activity you can commune with the kami of your weapon and change the element that it exhibits. This allows the kami to change from water to fire, for example. This kami cannot take on the void element through this process.

Starting Outfit: Traveling Clothes, Ashigaru Armor, Daisho, Yumi and quiver of Arrows, Traveling pack, Journal, Calligraphy Set.
One of these weapons is considered to have been crafted by you when you make the character and is chosen during character creation. 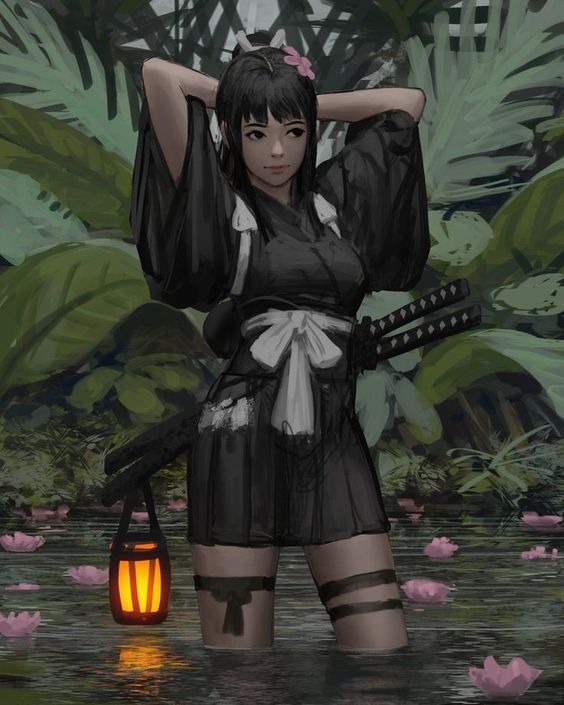 The Wolf Priest School came into being after the formation of the Wolf Clan. Those who join this school are taught that the kami Taiku-no-Makami was the one that led the Void Blades to the location of the prince, and thus saved his life. Wolf Priests are dedicated to the veneration of Taiku-no-Makami and often take care of the various shrines throughout the region dedicated to them. They have since developed a deep connection with Taiku-no-Makami and thus have gained the ability to call forth the children of Taiku-no-Makami to help them in combat and guide them when lost. Wolf Priests also play a central role of hunting down yokai, often taking on leadership roles and leading ‘packs’ of Wolf Clan samurai on the hunt.

The Wolf Priest school was founded by Orida Rin who is said to have been trained by Taiku-no Makami themselves. Orida Rin had not yet finished their training as a Void Blade when the Wolf Clan was founded, yet they founded the second school of the clan. The role of Wolf Priest has grown in importance over time, and is now seen as important to the clan as the Shrine Blades are.

Way of the Wolf (School Ability): Once per scene as a support action you may summon a number of spirit wolves equal to one half your school rank, minimum of 1. All spirit wolves beyond the first assist the alpha spirit wolf in their checks instead of making separate checks each. These spirit wolves act as you command, but you must spend an action to direct them. The fangs and hide of these spirit wolves both have the sacred quality. They last until he end of the scene or until they are killed/knocked unconscious, if the alpha is killed another spirit wolf will take over as alpha if there are spirit wolves still remaining. The stats for spirit wolves are the same as wolves that can be found on page 327 of the core rule book with the previously mentioned change.

You need to login in order to vote